At the time of its origin the new style, jazz-rock, enjoyed relatively suitable conditions for its development. Popular genres were welcoming infiltration and mix of new elements. This phenomenon was quite frequent in the music of the 20th century, as in the time span of one century an uncountable amount of musical styles originated. The synthesis, being an important constituent of post-modern thinking, is presented in jazz-rock by joining these already existing styles. In the process of synthesis musicians mainly derive from post-1966 jazz and rock music, pop music, simplifying its music devices, they also make use of the modality of traditional music and borrow sound from electronic and dance music.

Musical styles at disposal of jazz-rock demand a much wider musical palette. Stylistical components of rock music appear to be one of the basic elements of the jazz-rock development. For instance, the rhythmic archetypes in funk music are essentially of rock character, accentuating the second and fourth beats and using ostinatos and repetitiveness. Hard beat definitely did not come from jazz, but from rock. Besides, they draw from swing, syncope or offbeat rhythm of jazz. Groove music is also the hallmark of jazz-rock. Rock and jazz music were changing in the history, too, they absorbed modern impulses like electronic music, here we mean electrojazz or nu jazz. We could also notice the influence of the styles which contributed to the creativity in jazz-rock, albeit were not part of it. For example world music, based on traditional music, as well as free jazz utilizing free form, harmonic and melodic improvisation etc.

The issue of jazz-rock in historical development has not been elaborated by and large in Slovakia for several reasons. First of all, the research of jazz and rock in Slovakia is still of a recent date. Therefore domestic writers refer usually to the methods of foreign authors and their bibliography, or they are forced to use the methods of classical music, adapted according to the objectives of their research. The other reason dwells in the fact, that jazz-rock and fusion music is in itself a very wide genre combining a plenty of musical styles. Thus it is difficult to define the borders behind which the research of jazz ends and the research of rock begins.

While searching for appropriate methods we will respect these typical traits and try to apply them on music-theoretical analyses of the selected compositions, preceded by a transcription of the musical material. Using the method of music-theoretical analysis we would like to point to the specifics of the bands active in Slovakia at the beginning of the jazz-rock era. We will pay attention to melodic, rhythmic and harmonic layers. The absence of note material forces us to rely on our own experience. Particular layers in compositions yield to the principles valid in classical music, especially when we think of tectonics and melodics, to a certain extent also harmony, but this is often based on jazz, especially in the later periods of fusion music in Slovakia.

Our subject is considerably wide, therefore we have chosen such pieces from the early period of jazz-rock in Slovakia, which use similar compositional devices based on groove, ostinato melodic patterns and jazz-based improvisation. As no jazz-rock recordings were realized prior to 1969 in Slovakia, it is not easy to confirm whether jazz-rock groups had existed or not, or they had no access to the recording studio. The postmodern elements entered the Slovak jazz in 1977, when the pianist Gabriel Jonáš appeared on the scene, as well as in the time of the existence of the band Esprit after 1983. We can prove that after 1969 jazz ensembles playing jazz-rock were already active, however, they were usually giving concerts; no LP album was released at that time. Therefore jazz-rock records appeared considerably later compared to the concert performances. We are thinking particularly of the VV System Orchestra established in 1974 by its conductor Vladimír Valovič. Its first recordings came into existence only in 1979 (LP Quasar, Opus) and 1982 (LP Syntax, Opus). Slightly sooner, in 1977 the first recording of jazz-rock music originated in the form of an SP record Gabriel Jonáš (Panton, Mini Jazz Club). First rock musicians revealed their interest in jazz-rock, only later jazzmen took interest in it.

In the 1960s big-beat bands were in the foreground in Slovakia, oriented mostly on the music of the famous groups as The Beatles, Rolling Stones and suchlike. Jazz-rock elements appeared only little by little, when rock musicians started to involve more complicated rhythmic-melodic arrangements and more intricate harmonies into their music. In Slovakia Fermáta and Gattch were such bands, partly also the guitarist, singer and music composer Dežo Ursíny ranks among them (album Provisorium [Makeshift]), because the tendencies to polystylism1 and smoothing of the borders between the styles may be noticed in his music.

The band GATTCH was formed in 1969 and as one of the first groups it consistently focused on its members’ own original compositions during its whole existence. They tried for the fusion of jazz, rock and classical music. The band was founded by four musicians from Nové Zámky and Sereď: Juraj „George“ Štefula – drums and percussion instruments; Ľudovít „Ali“ Beladič – keyboard; Tomáš „Tomy“ Rédey – guitar and violin; Anton „Tony“ Lančarič – bass guitar. Karol ,,Charlie“ Slanina (rhythm guitar) joined them at the beginning, but shortly after he left the group and the line-up was stabilized as a quartet. In 1972 Anton Lančarič left and the post of bass guitar was occupied first by Valentín Čekovský and in 1974 by Gabriel Jonáš, a famous Slovak pianist (he had been studying accordion and guitar at the conservatory). The name of the band GATTCH hints at some English origin, however, it stemmed from the initials of the group members’ nicknames.

Example 1 Audio example and transcription of the piece Kvapka medu (GATTCH: A Drop of Honey) 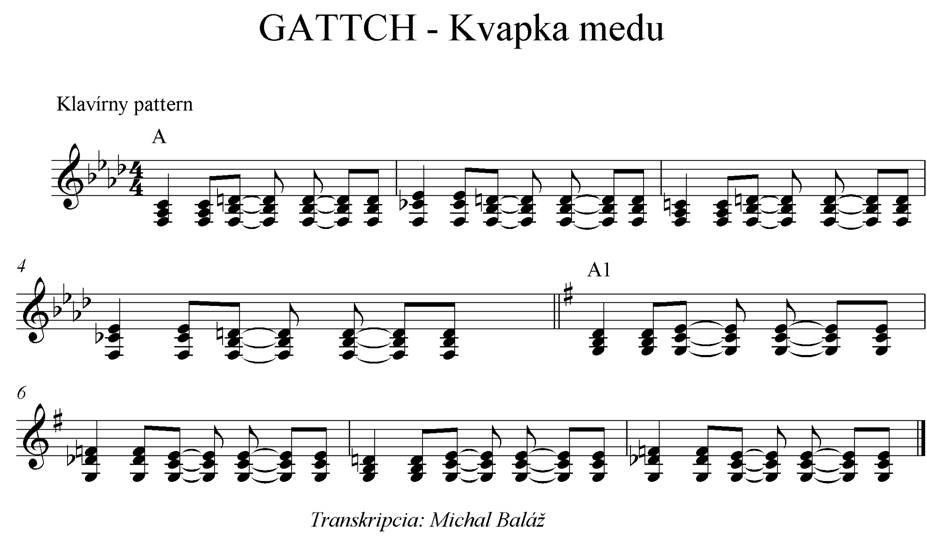 From the beginning of the piece the listener is indubitably captivated by an 18-second introduction. It is obvious that the composer aims to cope with the issue of the mingling of genres, as the introduction is based on a concept of classical music, it is not metrically determined and it reveals the influences of the 20th century music. The following section A in 35 bars is a core of the composition, the piano pattern may be perceived as the main theme modulating and appearing several times in the course of the piece. This rhythmically imaginative and bright groove (together with bass guitar) confirms the presence of jazz-rock elements. 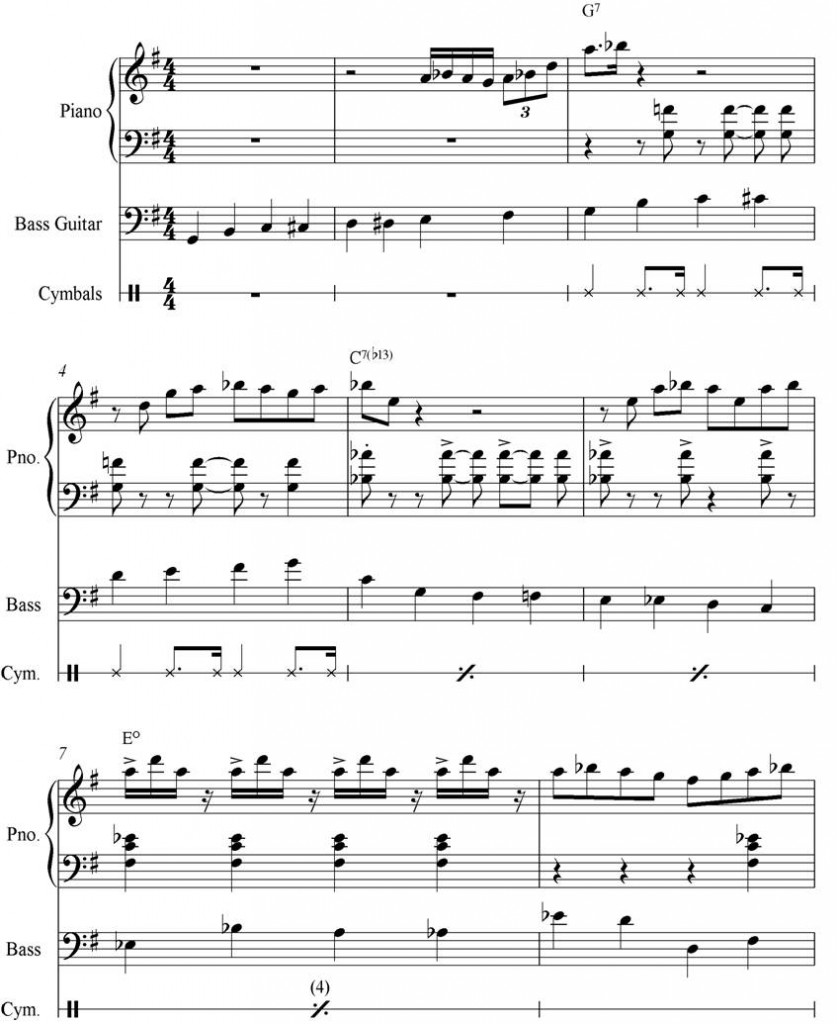 The important part of the presented composition is formed by B-section in jazz-swing style. The band plays with the idea of the usage of jazz elements, what is proven by a walking bass and swing phrasing of percussion instruments. The band GATTCH obviously consists of young musicians, conservatory graduates, who still lack the easy phrasing although the level of their craftsmanship is high. Comparing their approach with e.g. Slovak jazz-rock band Fermáta (we will mention it later) we may say that Fermáta presents a higher level of synthesis and instrumental maturity than the GATTCH.

Let us try to confront the Slovak jazz-rock scene with the Czech scene approximately of the same period.

For instance, take the composition Čaroděj [The Wizard] from the second album Symbiosis (released 1975, recorded some time sooner) of the Czech jazz-rock band Jazz Q of Martin Kratochvíl. We present here in a transcription an instrumental theme from the electric guitar and bass guitar parts. The theme is ostinato-like and forms a basic groove. With its duration (more than 16 minutes) the piece fits into the compositions from the early jazz-rock period following the music of the Miles Davis generation.

Example 3 Audio example and transcription of the piece The Wizard 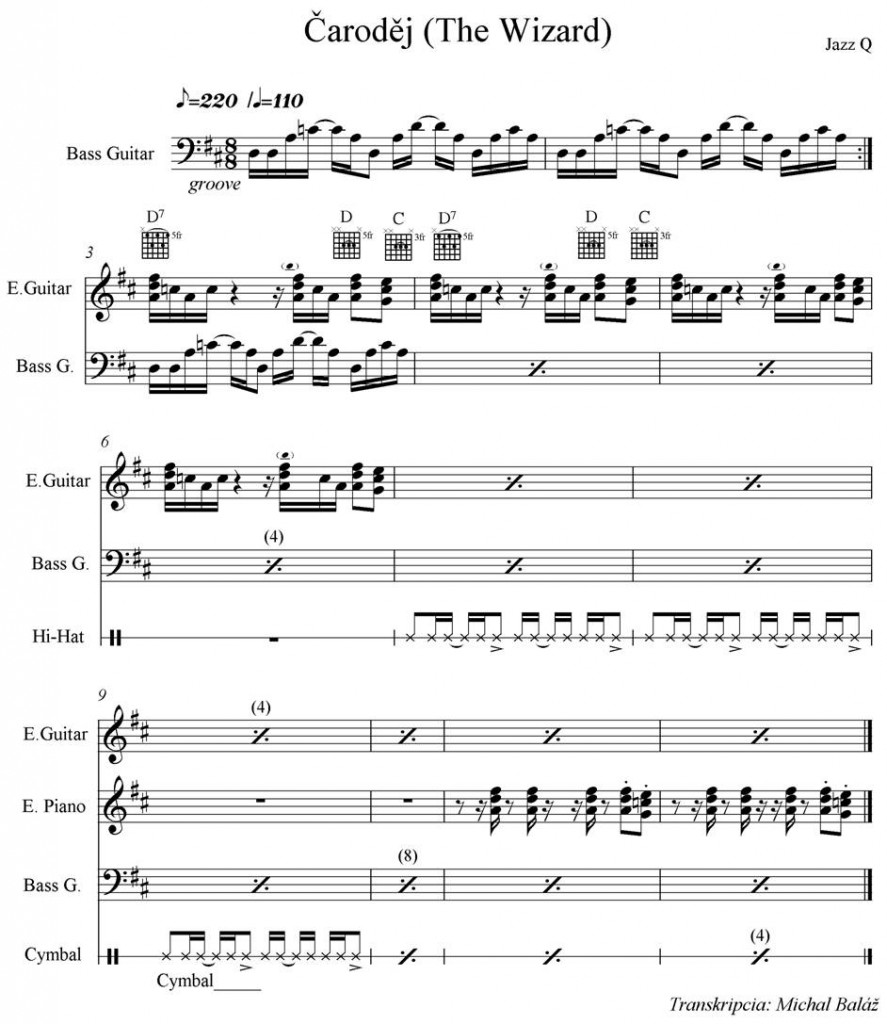 The extent of the piece allows its division into several shorter sections. The keyboard introduction of Martin Kratochvíl may be perceived as an independent section, the music of which is not related to the following process of composition. Also in subsequent sections we can notice the variety of musical, mutually incompatible elements. Particular sections are simply “glued” to each other, similarly to larger sections of a sonata cycle, or of other classical musical forms, according to the attacca principle. Rhythmic-melodic patterns are the most important moments in the composition, namely the bass guitar ostinato groove and guitar riff. Repeated patterns were a typical jazz-rock element in the 1970s. Bass guitar harmony-based lines have become the basic support for other instruments. In the piece The Wizard the bass line is led in D mixolydian key – or we may say the major key with a minor seventh. Similarly, the rhythmic-melodic pattern of the electric guitar is built on two chords D7 and C major. In the case of the D7 it is not the dominant seventh chord on the fifth grade of the scale, it is the major seventh chord on the first grade with a minor seventh, coming from the blues major pentatonic scale. In jazz the usage of blues pentatonic is common and we can see it in jazz-rock too. Therefore typical jazz-rock elements of the 1970s can be seen also in the work of the band Jazz Q of Martin Kratochvíl.

Steering our attention to rhythmic pulsation, the metre 8/8 in The Wizard may appear incorrect at first sight and could be changed for 4/4 metre. However, in our trancription we take into account also the overall rhythmic pulsation, stressing two last eighth notes (the seventh and eighth one), contrasting to the sixteenth notes in rhythmic-melodic patterns of the guitar and keyboards. However, the controversy over the metrical record is not necessary, as in the case of the even metre the rhythm is divisible into two, four or eight shorter phrases etc. The similarity of elements can be seen on our domestic scene, too, exemplified by the bass guitar pattern from the Pieseň z hôľ (The Song from the Uplands) by Fermáta (LP Pieseň z hôľ /The Song from the Uplands, Opus 1976).

The mentioned metre 8/8 is significant from both the practical and graphical viewpoint. Due to a number of ties the record makes easier the division into smaller rhythmical (eighth-note) units. Bass guitar line is again clearly and logically built, again ostinato during the whole piece (excluding the section B). The usage of ostinato patterns is typical for the Slovak and Czech jazz-rock scene, what may be observed also in its relation to the tendency of the world jazz-rock of the 1970s. For instance Weather Report band uses groove as its basic building element. Its main exponent the bass guitar player Jaco Pastorius promoted groove onto the highest technical and artistic pedestal. 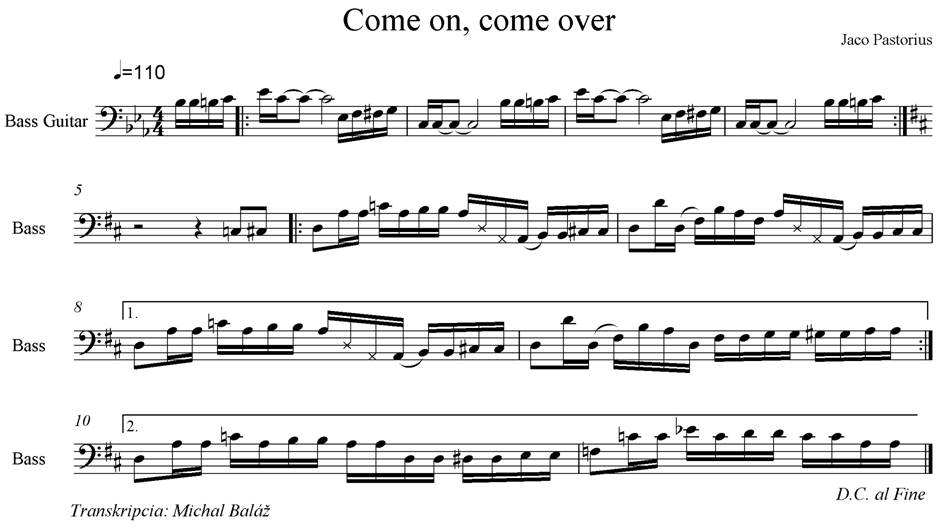 Groove in Jaco Pastorius’ rendition is of a unique and original presentation. He enriched the music world with virtuoso elements in bass guitar play and thus elevated the position of the band sideman into the leader. In our country this phenomenon is presented for instance by the drummer Pavol Kozma, bass guitarists Juraj Griglák, Róbert Vizvári, drummer Martin Valihora and other musicians. New sound presented by electrically amplified instrument is one of the main stylistic elements in the early jazz-rock. New sound possibilities of the instrument utilization are joined with it, e.g. bass guitar pinch harmonics, or the slap bass technique. Therefore we may say that the beginnings of jazz-rock in Bohemia and Slovakia were influenced mainly by the music of the band Weather Report and jazz-rock music by Miles Davis.